Collision Avoidance Systems (CAS) have been declared "groundbreaking technology" by the National Transit Safety Board (NTSB). CAS, also known as, pre-crash systems, forward collision warning systems or collision mitigating systems, first came out in 1995 when a group of scientists and engineers decided it was time to begin demonstrating the benefits of this new technology. By the year 2000, the U.S. National Highway Traffic Safety Administration (NHTSA) began researching whether or not this new technology should be mandated. Today, automobile manufacturers are rapidly implementing this technology in all of their new cars.

From 2012 to 2014, the NTSB investigated nine crashes involving passenger and commercial accidents crashing into the rear of other vehicles shown in Table 1. Although, rear end crashes are rarely fatal, studies have shown 1 in 1000 crashes will result in a death. In 2011 and 2012, rear end crashes were the cause of 3,491 deaths and more than 1 million injured passengers, see Table 2. 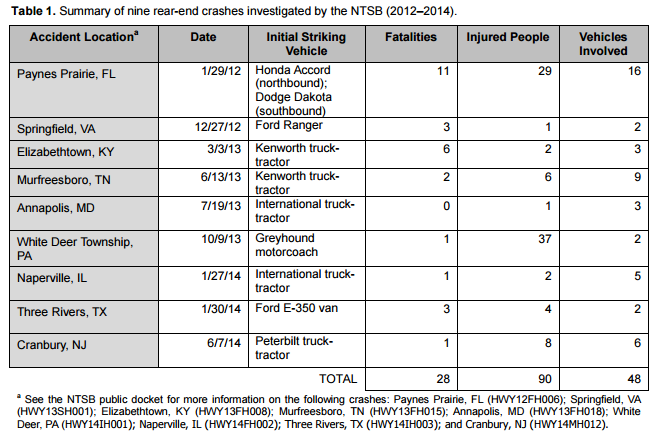 What is a Collision Avoidance System?

The fundamental goal of CAS technology is to obviously limit the number of accidents on road. How do they plan on doing this? CAS systems detect impending danger by using radar, which can be used in all-weather type conditions and on occasions, laser and camera sensors which have very limited or no use ability during bad weather conditions.

Auto-braking is a system that kicks in when it sensors an impending forward collision with a vehicle or pedestrian. This specific technology has been one of the most beneficial systems since this technology has been around. With the ability to set an auto-brake on a moving vehicle preventing that vehicle from colliding with another, has reduced overall claims and accidents historically.

This technology allows the headlights to shift in the direction that the driver steers towards. That is correct, the lights actually move along with the car to open up the visibility at night and in foggy weather.

Just like the name, the system alerts a driver when the vehicle begins to shift into another lane, unless the signal is turned on indicating a move to that lane. This has tremendously helped big-rig drivers who drive for long periods of time and begin to lose focus.

This is a vehicle based sensor that detects driver's side and rear. When the driver begins to veer towards an object that this is this monitors range, they are alerted either by a visual alert, an audible alert or a vibration indicating impending collision. This technology can also alert a driver when backing out of a parking space when traffic is approaching from either the left or right sides.

Autonomous Cruise Control, also known as "Adaptive Cruise Control" or "Radar Cruise Control" is a system that will automatically adjust the vehicle speed to maintain a safe distance from the vehicles that are in front of that vehicle. This technology is consisted of on-board sensors only.

Cooperative Adaptive Cruise Control is more advanced than the Autonomous Cruise Control in the sense that this technology uses a full range of sensors from dash sensors, satellites, road signs, signal lights, reflectors or transmitters from OTHER vehicles. This system alone is paving the way for the fully autonomous self-driving car.